skip to main | skip to sidebar

AFSCME members and activists are tireless in our efforts to elect pro-worker candidates and shape public budgets to protect public workers and vital government services -- and to ward off legislative attacks on working families. Learn more about what's happening and what you can do in Madison and on Capitol Hill and in your community to help elect politicians and enact policies that are right for your family.
Posted by Scott Sharp at 9:36 PM No comments:

Health Care Reform - What Does it mean for Union Members?

AFSCME has scheduled a candidate interview/screening appointment with Mayor Tom Barrett, with details as follows:

The interview will be conducted jointly with SEPAC, Council 24’s Political Action Committee. Invitations have been extended to candidates Scott Walker and Mark Neuwman for that afternoon as well.

Light refreshments will follow the interview process, prior to the annual holiday party held at Council 48 Headquarters. Council 48 has graciously invited all committee members to attend this annual event which begins at 5:00 p.m.

Please contact your respective Council office if you have any questions regarding overnight accommodations. And as always, please feel free to call with any questions or if you would need additional information.
Posted by Scott Sharp at 8:12 PM No comments: 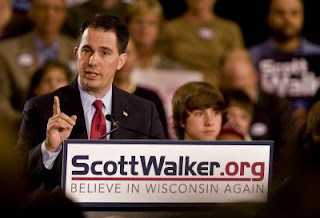 It is official both candidates for Governor of Wisconsin in 2010 will come out of Milwaukee County. This should be an interesting race - We know where Scott Walker stands with AFSCME members now we need to find out where Tom Barrett stands. In 2002 Barrett supported AFSCME members.

Posted by Scott Sharp at 7:16 PM No comments:

In these hard economic times bargaining has been difficult for our Locals. This post is a positive approach to negotiations. Some counties would like to see our pay rates adjusted back to what they were in the 80's, include furlough days in their budgets, and contract out our jobs. In this article you will read where AFSCME members are once again leading the way to help maintain services for the community in which they work and live.

For the second time in less than six months, 1,500 Dane County employees represented by AFSCME have reached a negotiated agreement in an effort to help the county address a severe revenue shortfall due to the unprecedented national economic downturn. "This is the second time in recent months that AFSCME members in Dane County have stepped up and voluntarily agreed to pay reductions. These agreements are the product of respectful negotiation with both sides listening carefully to each other. We all want to help the county cope with these challenging times while preserving vital services that citizens expect and deserve," said Shannon Meier, president of AFSCME Council 40 Local 720.
In July of 2009, AFSCME members in Dane County agreed to reduce their pay by 5%, a negotiated agreement that saved the county $3.3 million. "The decision by AFSCME members to reach these agreements was painful. But in the end our members see this as the prudent and responsible path," Meier said. Council 40 Staff Representative Larry Rodenstein credits AFSCME members and County Executive Kathleen Falk with taking seriously a shared commitment to maintaining quality services. Such shared problem solving stands in sharp contrast to some other counties, he said.
"The pragmatic path of finding common ground and reaching negotiated settlements stands in sharp contrast to the autocratic political posturing of Milwaukee County Executive Scott Walker," Rodenstein said. "Walker's only instinct is to try to dictate terms and solve budget woes solely on the backs of front line workers. His open contempt for workers leads only to confrontation, not solutions. Dane County is fortunate to have leadership that puts getting results ahead of posturing," Rodenstein said.
Posted by Scott Sharp at 10:45 PM No comments:

What's Happening at Dept of Commerce

I have added a link under helpful websites to the Department of Commerce Safety & Building website. This is another valuable site to keep in touch with stimulus monies available and proposed legislation. Dept of Commerce
Posted by Scott Sharp at 9:56 PM No comments:

Council 40 will be holding an Education Conference in WI Rapids this weekend.

This is a combined workshop for Correctional Officers, Health & Safety, Health Care Workers, Street and Highway Workers, and the Women's Committee.

The Convention starts on Friday and will run through Monday until 3:00P.

The workshop I am co-hosting with John Grabel and John English is on Friday the 6th from 10:30A until 12:15P. Our topic is CDL's and Budgets. John English will also be presenting a workshop on Bargaining Protection for CDL Holders. Currently, in Local 67's contract we have contact language that protects our members. Hopefully, we can work on getting all Locals to get similar protection within their contracts.

With the help of Sister Arndt we secured a State Patrol officer as speaker for the Saturday session called "Rules of the Road."

After the PEOPLE Convention, I am happy to see Ron Kent will be doing a workshop on Parliamentary Procedures.

The Street & Highway Worker's Advisory Committee will be meeting at 6P on Thursday evening. An election for the Chair of this Committee will take place at this meeting. I wish to thank all members for their past, present, and future support.
Posted by Scott Sharp at 8:53 PM No comments:

On October 30, 2009 the ACLU of Wisconsin’s Executive Director, Christopher Ahmuty released the following statement in response to media stories and a media release from State Representative Brett Davis (R-Oregon) encouraging state health officials to put the health of prisoners, correctional officers and their communities in jeopardy by denying H1N1 vaccine to prisoners including pregnant women inmates:

State Representative Davis and others are wrong from both public health and civil liberties perspectives to complain that women prisoners have received H1N1 vaccine at the Taycheedah Correctional Institution near Fond du Lac, Wisconsin. In overcrowded jails and prisons, such as Taycheedah, the risk of H1N1 contagion spreading among prisoners and correctional officers and then to the officers’ families and communities must be addressed vigorously.

The Centers for Disease Control’s Interim Guidance for Correctional and Detention Facilities on Novel Influenza A (H1N1) Virus (May 24 2009) recognized that: “Correctional institutions pose special risks and considerations due to the nature of their unique environment. Inmates are in mandatory custody and options are limited for isolation and removal of ill persons from the environment. The workforce must be maintained and options are limited for work alternatives (e.g., work from home, reduced or alternate schedules, etc.).

In addition, many inmates and workforce may have medical conditions that increase their risk of influenza-related complications.”
See: www.cdc.gov/h1n1flu/guidance/correctional_facilities.htm ACLU of Wisconsin Executive Director, reflecting on the CDC’s guidance, said today, “Taycheedah’s prisoners and guards are in just the kind of setting that needs aggressive preventive measures to avoid widespread infection. Suggesting that prisoners, who are in close contact with facility staff, are not a capable of catching and spreading the virus is ludicrous. To suggest that they should not receive vaccine because they are less important than the ‘law abiding citizens of our state,’ will only further the spread of H1N1 to everyone.”

The American Civil Liberties Union of Wisconsin in a May 1, 2009 media release urged public health officials “to implement a public health policy which is rational, effective and has the least intrusion possible on civil liberties.” Denying or delaying appropriate preventive actions, including vaccination, is neither rational nor effective.

Ahmuty reminded the public, “Prisoners are serving their debt to society, but being subjected to disease and death is not part of a just sentence in any civilized society.”

The ACLU of Wisconsin and its 8,500 dues paying members defend and promote the civil liberties and civil rights of all Wisconsin residents.

Scott says: Maybe before Representative Davis made such a public statement he should have spoken to AFSCME Correctional members or even their family members about how they would feel if they hadn't been given the opportunity to be vaccinated. Work Zone Safety doesn't just pertain to the road workers. AFSCME represents Healthcare Workers, Child Care Providers, Social Workers and Correctional Officers who are within the CDC guidelines of being vaccinated. We all support the CDC's guidelines regarding this pandemic. Write to Brent Davis at brent.nicastro@legis.wisconsin.gov. and notify him of your dissatisifaction with his public comment.
Posted by Scott Sharp at 6:32 PM 1 comment:

Why Scott Walker can't take a dose of his own medicine

Remember when County Executive Scott Walker first ran for County Executive?
Remember how he promised to give back $60,000 annually during his time in office?
I remember, and I also remember Walker reneging on that promise last year.

Walker’s yearly salary is somewhere in the area of $119,611, and he collects every nickel of it, but given the fact that he bought a big new house in 2007, I’m not shocked that he’d break a promise to give back salary.

However, I find it galling that Scott Walker has no qualms about collecting his six-figure salary while he threatens to lay off almost 200 county employees because their union wouldn’t accept across-the-board pay cuts, especially given the fact that even if the unions agreed to the pay cut, Scott Walker would still retain the right to layoff or furlough employee in accordance with the labor contracts in place.

If Scott Walker were a real leader for Milwaukee County – as he likes to portray himself as – then he’d lead county workers by example and take exactly the same cut in pay and benefits that he’s demanding from unionized county workers. After all, why should one group (a group largely comprised of middle class folks) feel all the pain while Scott Walker continues to collect his fat six-figure salary? The fact that Scott Walker has been unwilling to share the pain he expects county workers to feel speaks volumes about the man and the extent of his hypocrisy.

Click on the links to see a picture of his home with a pool, but he wants to shut down county pools. He lives in a very nice home - no modesty in his gene pool.
Posted by Scott Sharp at 2:03 PM No comments:

AFSCME has an International Convention every two years.
In 2010, a new International Vice-President for Wisconsin will be elected at this convention due to Brother Murphy's retirement.